The DMS Awards of Distinction

The DMS Awards of Distinction acknowledges former students who have contributed to student development and success, advanced student support and mentoring, and exceeded others in providing leadership and service that enriched the lives of students during their time at Texas A&M University.

These awards specifically value each individual’s extraordinary contributions to the Department of Multicultural Services from our founding year through 2019. Award recipients were nominated by decade, 1989 – 1999, 1999 – 2009, and 2009 – 2019. 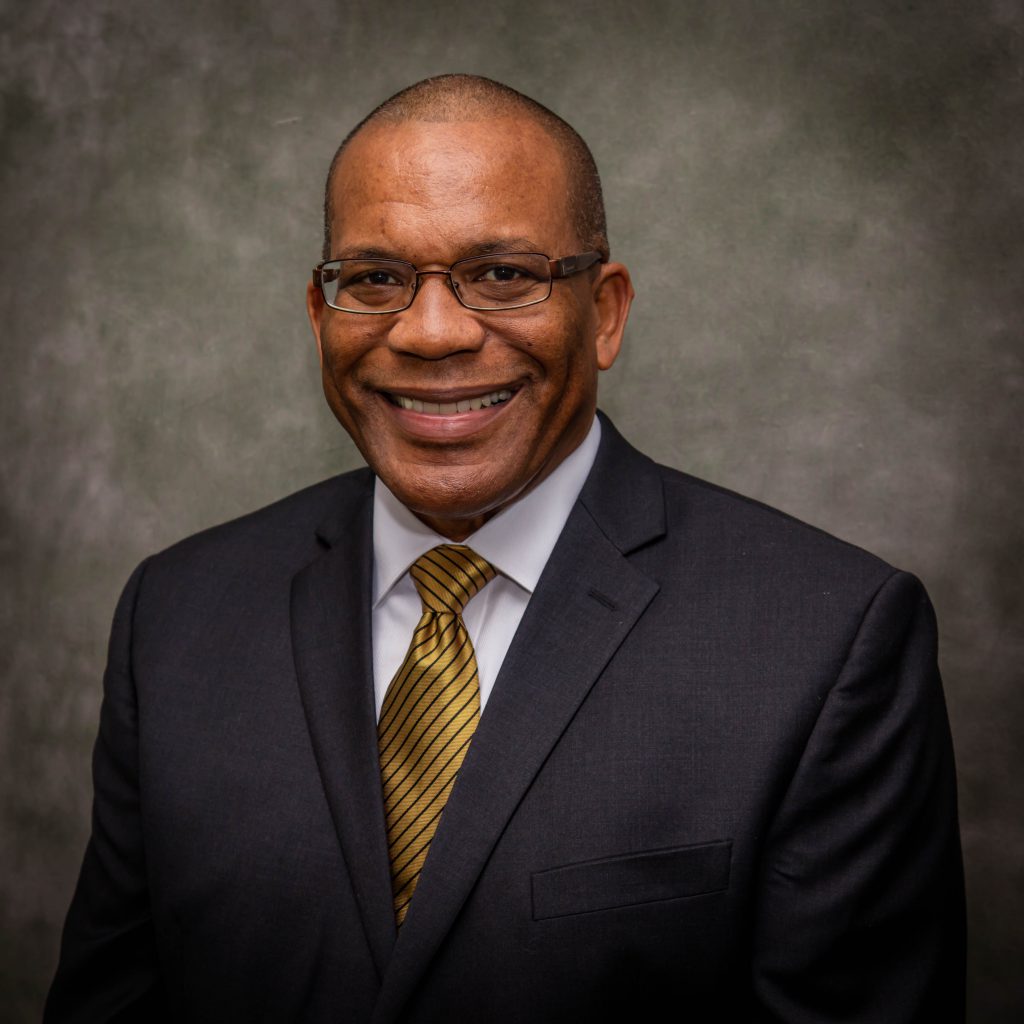 While serving as Director of Multicultural Services at Texas A&M, the institution maintained its highest freshman retention rate for minority students for 10 consecutive years. The Department of Multicultural Services was also recognized by the Texas Higher Education Coordinating Board for creating a positive campus climate amongst public universities and colleges and received the Noel/Levitz Retention Excellence Award.

Mr. Carreathers is a founder of the Southwestern Black Student Leadership Conference (SBSLC), the largest student-run conference in the nation, co-founder of the Diversity Education Institute and founder of the Multicultural Affairs Institute. He served as a strategist to assist Texas A&M and other Texas state universities to find alternative solutions to maintain minority recruitment and retention programs during the Hopwood decision.  His areas of expertise include campus diversity initiatives, program development, mentoring and student retention.

Mr. Carreathers has received recognition for the following awards: Texas A&M Association of Former Students Distinguished Faculty Achievement Award in Individual Student Relationships, the John J. Koldus Faculty/Staff Achievement Award, the Young Black Achiever in Houston, Who’s Who in Black America and the Outstanding Educator Awards InRoads Houston. He is a Life Member of Alpha Phi Alpha Fraternity, Inc. and the Texas Association of Black Personnel in Higher Education.  His hobbies include collecting African-American art, listening to jazz and reading literary works by African-American authors.  Mr. Carreathers is married to Marilyn Hilliard Carreathers, and is the proud son of the late Dr. Raymond E. Carreathers and Ernestine T. Carreathers. 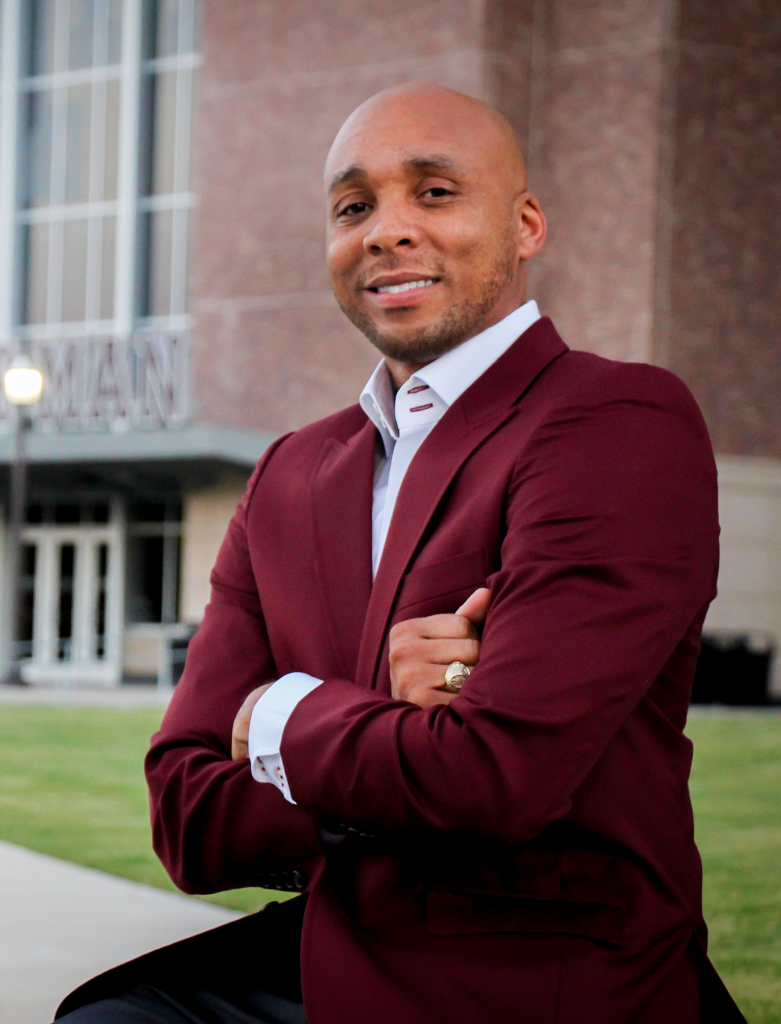 His start-up technology company, Amagine Technologies Corp., has been ranked 15th among the 100 fastest growing Aggie-owned or Aggie-led businesses in the world. His company has also made a lasting impact in student learning and recruitment through innovative technologies here at Texas A&M. A few of his projects include Bright Complex football locker room, Letterman’s Club, Player Development Center, Northside Hullabaloo Residence Hall, Outdoor Track and Field, New Commons Building, Center for Infrastructure Renewal, and the one and only Kyle Field Football Stadium. Amagine has designed and installed some of the largest technology projects for residential, commercial, and higher education institutions in the nation. His work has been featured across the country on numerous news mediums and television stations including BET, MTV, VH1, NBC, FOX, ABC, ESPN, and the NFL Network.

While pursuing his degree at Texas A&M University, Mr. Collins maintained strong involvement in extracurricular activities on and off campus including holding several student leadership positions and receiving numerous student accolades. A few to note include planning, coordination, and execution of Multicultural Services I Care Student Retention and ExCEL programs, as well as various leadership roles in Alpha Phi Alpha Fraternity Inc. In addition, he is the recipient of the President Achievement Award, Texas A&M University Scholar Award, Buck Weirus Spirit Award, and is a Mays Business School CBA Fellow. Over the years, Mr. Collins has remained committed to reaching out to Multicultural Services to provide internship and other professional experiences and opportunities to Texas A&M students. He also serves on various Texas A&M alumni organizations, worked closely with the A&M Prospective Student Center to help recruit future Aggies, and is dedicated to supporting mission and outreach programs in the US and abroad. Mr. Collins is married and has three children. He is also a proud first-generation college graduate.

Mr. Eric Watson is a Senior Regional Advisor and 15 year veteran of the Texas A&M University Oﬃce of Admissions and Records and Houston Regional Prospective Student Center.  He holds a Bachelor of Science in agricultural journalism with a minor in meteorology and Master of Higher Education Administration from Texas Tech University.  Mr. Watson was first a news producer and on air personality at CBS aﬃliate KBTX-TV in Bryan, Texas.  Across his over 15 years in Texas A&M Admissions following his news production career, Mr. Watson has been influential in facilitating efforts for higher degrees of collaboration and partnership between Multicultural Services and the Office of Admissions.

While studying at Texas A&M, Mr. Watson was a member of Alpha Lambda Alpha Chapter of Phi Beta Sigma Fraternity, Inc. and served in numerous student leadership roles. He has been an active and avid supporter of various organizations and programs within Multicultural Services since 1995. He served as an SBSLC Executive Staﬀ member and co-chair, Excellence uniting Culture, Education, and Leadership (ExCEL) Executive Staﬀ member and Team Leader, and received the ExCEL 1995-1996 Participant of the Year Award.

Mr. Watson is a dedicated husband of eight years, father of three and resides in Humble, Texas. 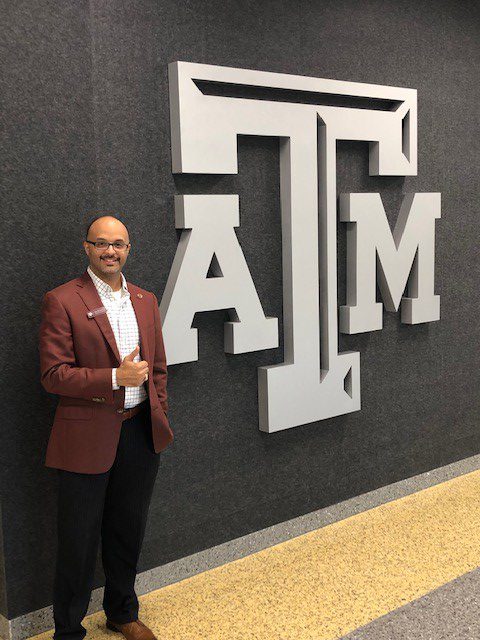 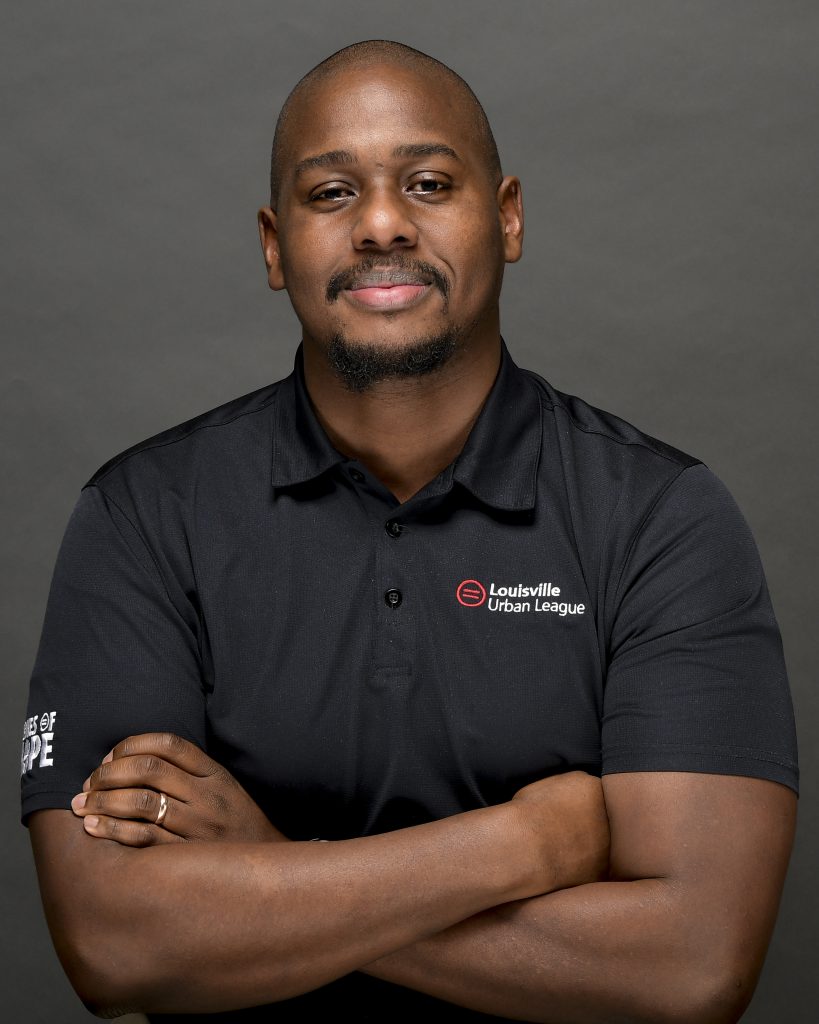 Mr. Lyndon Pryor is the Chief Engagement Officer at the Louisville Urban League in Louisville, Kentucky.  Mr. Pryor holds a Bachelor of Science in political science and Master of education concentrated in student affairs administration from George Washington University.  Currently, Mr. Pryor oversees the intentional integration of service programs and projects in an effort to provide holistic service and care for community members.  Mr. Pryor works directly with the League’s Youth Development and Education Department, manages all communications areas for the organization, supervises a team of community health workers, volunteers, and engages staff, and partners with government officials to identify innovative approaches to serve the community’s needs through programmatic and policy efforts.

Before landing in Louisville, Mr. Pryor was a student development specialist in the MSC Student Programs Office at Texas A&M University, where he worked to assist students in their personal growth and build their professional competencies and leadership skills.  Mr. Pryor’s commitment to student voice and programmatic innovation then; and his investment in empowering communities and structural change now; can be directly connected to the people, programs, and collective impact the Department of Multicultural Services has had on his life.

While Mr. Pryor was a student, he served as part of executive leadership for Excellence uniting Culture, Education, and Leadership (ExCEL), Maximizing Educational Development through Academic & Leadership Skills (MEDALS) and the African American Student Leadership Institute (AASLI).  Mr. Pryor worked alongside Multicultural Services staff to transition ExCEL into a yearlong student success program, while developing partnerships with the Corps of Cadets, New Student & Family Programs (formerly New Student Programs), Athletics Department, Aggie Access, and Century Scholars.  Although he was still a student, Mr. Pryor was instrumental in the development of a grant funded student success longitudinal assessment project with the Department of Student Life Studies.  Further he served as part of a first generation focused committee to provide insight into the development of the student experience component of what became the Regents Scholars Program.  In recognition of his high level of leadership and service, Mr. Pryor received the Buck Weirus Spirit Award and Multicultural Services Diversity Award.  As a former student, Mr. Pryor returned to Texas A&M as advisor to the Woodson Black Awareness Committee in 2007.  Continuing his legacy of DMS contributions, Mr. Pryor assisted in the launch of the A&M Collective which transitioned into the Aggie Black Male Connection (ABMC), partnered with AASLI and later Black Student Alliance Council (BSAC) to establish the longstanding Black Parents BBQ tradition during Family Weekend (formerly Parents’ Weekend), as well as Black Aggie Weekend, State of the Black Aggie Symposium, and coordination of Black History Month.

Major Ivan Morin is a Major in the United States Marine Corps and instructor pilot in the V-22 Osprey.  Major Morin studied Aerospace Engineering while at Texas A&M, was accepted into Officer Training School and was commissioned upon graduation as a Marine.  Major Morin also holds an Airline Transport Pilot certificate with a rating for the Embraer 175 passenger aircraft.  He has logged 2,075 flight hours and has flown in 13 different countries over the course of five deployments.  Major Morin’s military decorations include the Air Medal, Navy and Marine Corps Achievement Medal, Global War on Terrorism Expeditionary Medal, National Defense Service Medal, Humanitarian Service Medal, and a Safety Award for 1,000 mishap-free flight hours.  He is also a member of the Latino Pilots Association and the Organization of Black Aerospace Professionals.

While a student, Major. Morin very active. Along with being a Buck Weirus Spirit Award recipient, Century Scholar and member of the Society of Hispanic Professional Engineers (SHPE), Major Morin served as part of three Excellence uniting Culture, Education, and Leadership (ExCEL) Executive Staffs, including Executive Director.  He also served as a Maximizing Educational Development through Academic & Leadership Skills (MEDALS) mentor and was hired as the first Multicultural Services student success intern where he managed projects focused on student learning.  Major Morin was chosen to represent Multicultural Services student leaders as part of former Texas A&M President, Robert Gates, recruitment strategies.  Major Morin traveled the state across numerous weeks on the president’s plane to connect and network with admitted high school students.  Major Morin participated in the selection of a Multicultural Services Director and made it a priority to ensure the ExCEL bus route acronym was appropriated represented when he became driver for TAMU Parking and Transportation Services.

Mr. Morin and his wife Stephanie — who he met at Texas A&M — have three daughters; Olivia, Iliana, and Veda. 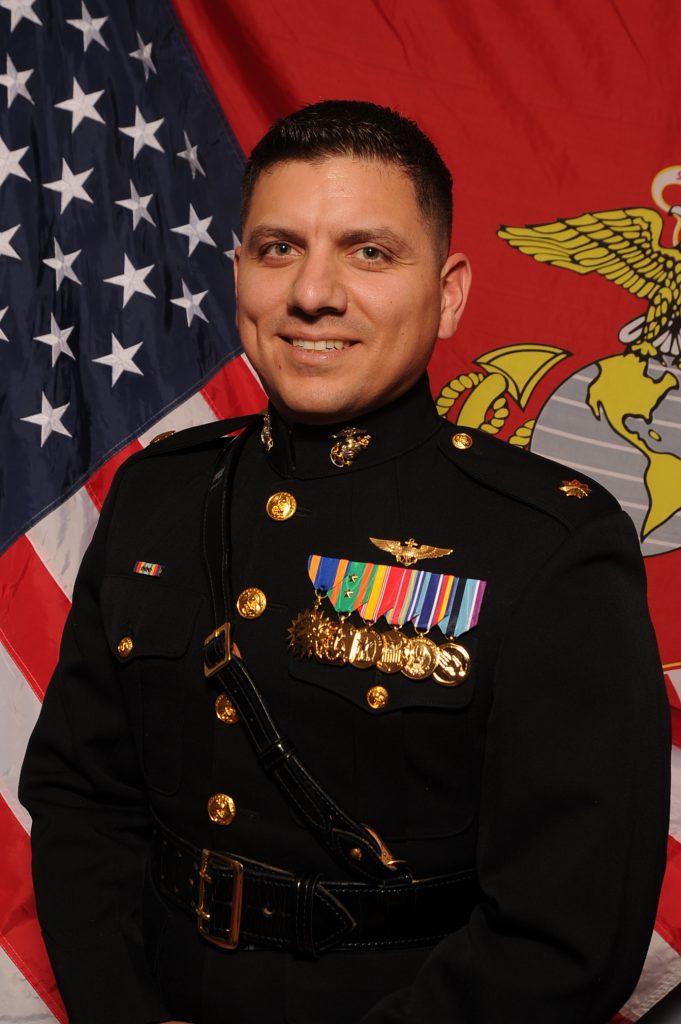 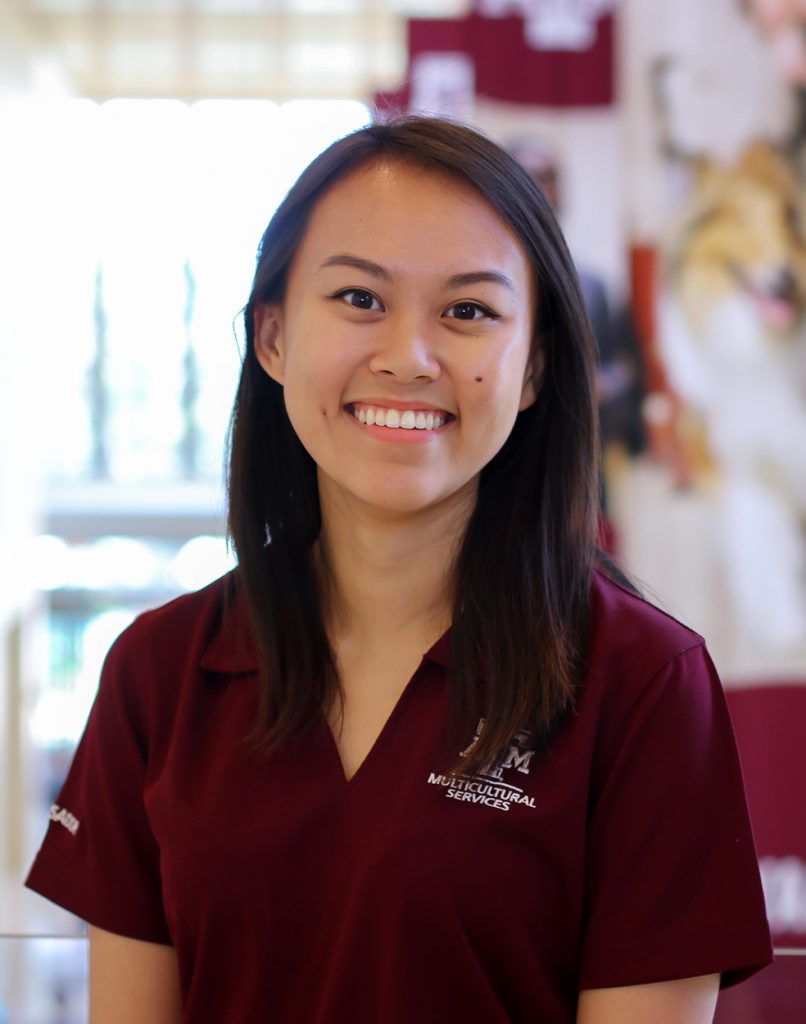 Ms. Jessica Hsu is currently a graduate assistant for Asian Pacific Islander Desi American (APIDA) Initiative within the Department of Multicultural Services.  She graduated from Texas A&M with a Bachelor of Science in nutrition, and is currently pursuing a master’s in healthcare administration. Her interest in diversity and inclusion sparked when she was a student leader within the DMS and participated in the RISE program.

Ms. Hsu is a 2018 Buck Weirus Award recipient, a 2018 Aggie Leader Scholar, and is a part of the Medical Group Management Association, where she was a first-year vice president. She has dedicated her DMS Award of Distinction to the APIDA/Asian American leaders and members of the 2017-2018 student body for challenging the social norm, motivating our communities, and continuously advocating for social justice.

Mr. Luis Moreno currently works as a quality control systems analyst at Zachry Group. While studying at Texas A&M, he was heavily involved on campus from being a great ambassador to the College of Engineering, served in many leadership experiences within the Division of Student Affairs, and an ambassador to the Department of Multicultural Services (DMS). His personal motto is “if you’re too big to serve, then you’re too small to lead.”

Some of his accomplishments include him becoming an Engineer-in-Training (EIT) and graduating Magna Cum Laude with a B.S. in industrial engineering. Mr. Moreno was part of the first freshman cohort of the Latino Males United program and with his leadership, he was able to transform lives through role modeling and mentoring, which created pathways for the men in the program to serve in many leadership roles across campus. His involvement in the DMS invigorated his passion for diversity and inclusion. This passion led him to become a leader in the Hispanic Presidents’ Council (HPC) and became a student government senator with the help of HPC’s first “La Familia” campaign. Mr. Moreno was proud to be a first generation college student and in his time at Texas A&M he was able to advocate for many people with diverse experiences and was a catalyst for change. 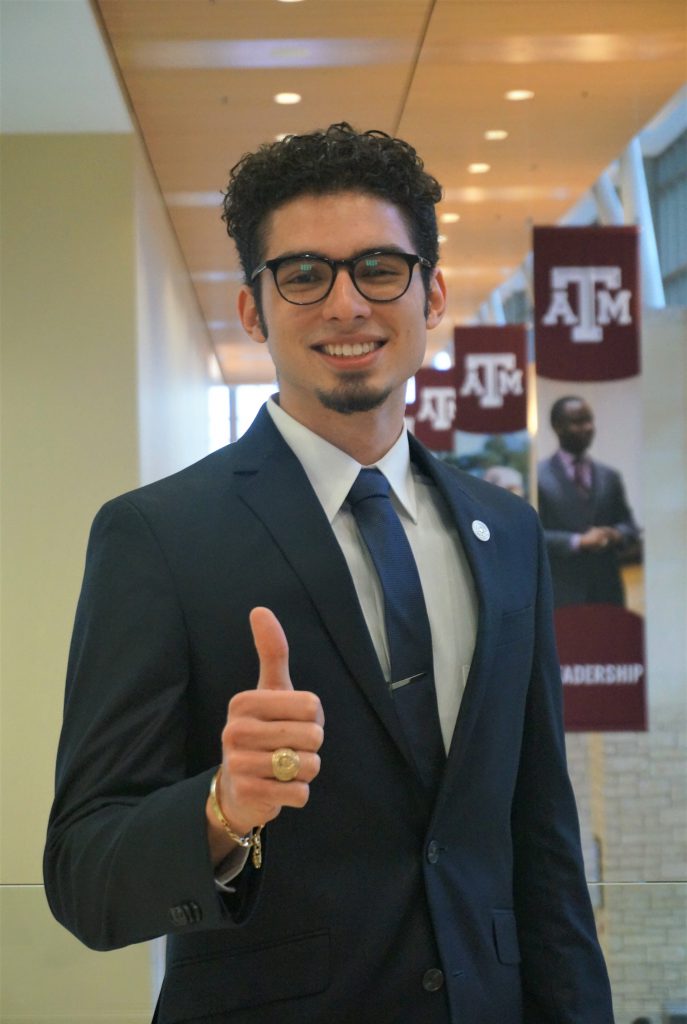